RainForest Pickings #1 - It’s a Mystery to Me 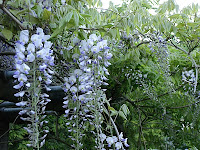 The novel I’ve been working on is at a crossroads. It’s currently in Ideal Reader’s hands and I’m taking a breather before I begin revising this draft. During the break from my sci-fi universe, I start thinking about the next project -- a mystery that’s been brewing since I first saw the main icon of the story.

Drafting character profiles helps me to find what type of character I need for this particular story. For this novel, I’ll be using a main character that I created for another story in the same genre. This protagonist needs more development for the different format and perhaps a helper/associate. It’s always handy for the main character to have a partner to discuss the clues with, and to cover his back in some of the tight situations.

Research for this story is required for several reasons: the type of weapons used, forensic information related to the weapons, and specific details about the location. A lot of thought and decision-making go into the preparatory work, as the possibilities are winnowed until the particular ones that suit the story emerge. Many variables can affect how long one can spend in this stage -- but to move forward, there comes a point where the elements seem to fall into place.

Now I start to imagine the scenes, and the dialogue needed. In one of the writer’s books on scenes that I refer to, the advice says to have a purpose for every scene which relates to the story arc, a reason for being where it is, when it is. More thinking time needed for the scenes -- who will be on stage, what the interaction will be, what the scene is trying to accomplish as far as story arc. I begin with scenes and dialogue since that does more to bring the characters alive in my mind. I add notes around the scene to help later when I’m writing the narrative and setting details for the action taking place in the dialogue. It works for me.

There is another thought process which needs to be interwoven into the storyline, and that’s the clues which need to be strategically placed, there to be seen, but not explained. Clues and hints seem to come out of the material at different times, so even when I’m writing another chapter, I can go back and add a clue or suggestion to lead the reader in a particular direction. This sounds easier than it is, but the point is not to try to force the issue when you’re laying the groundwork.

That’s what’s on my mind today as I walk through the rainforest, sorting out the story pieces and picking those I like. (From the viewpoint of a writer starting a new project -- this is only how I organize my writing, not written as an expert’s advice, but rather as a layman’s observation.)
April 2010
Posted by D.G. Hudson at 5:43 PM