If I Wish Upon a Constellation - WEP October Challenge

If I Wish Upon a Constellation,  will more stars make the wish come true?

What was that old Terran saying? Star light, Star bright, first star I see tonight, I wish I may, I wish I might, have this wish I wish tonight. . . .

As I look up into the darkness above me, I see multitudes of glittering stars, and a few constellations I know. Some regions of the starry sky have order and others do not, they seem splattered on the darkness in chaos. The swirling clouds of nebuli glow with colours for which we have no names, as stars are born from the etherial dust. A flash of distant brightness as a star goes nova, and a comet streaks by, its tail streaming. This is a performance, a light show of the night sky.

All around me I see the dust and little rocks which make up the surface of this asteroid which is our colony's home. This fine dust gets into everything. Likely it's in our bodies, too. The surface is barren and unwelcoming. But below the surface, we manage with what we have. It's not a bad life, but it is a hard life.

On Terra, so the teachers tell us, the ancients studied the stars, gave them names and sent probes to explore them.. All this, which they told us was unfounded however, until a recent discovery.

While working my shift turn at the main library, I found a forgotten copy of an antiquated manuscript on constellations which detailed groupings of stars in the various quadrants as seen from old Terra. It had fallen between two storage shelves. Now, I had that manuscript, hidden in my satchel, loaned to me under strict secrecy by a sympathetic librarian in our colony.  I had to return it in a few days. All artifacts had to be submitted to the colony panel.

As I leaned back on the rock, I caught a movement out of the side of my eye. All my sensors went on high alert. What was that? And, why is it hiding?

Something doesn't feel quite right. Maybe I'm sensing something. Prickly hair on my neck, and a twitchy eye.  A bad sign. No one could know about the manuscript pages I brought up to compare to our stars. . .could they?

I look around but see nothing. Only one person knows I'm on the surface and that person is out at one of the camps.  I have to do something. . .

I reached for the laser pistol clamped on the side of the suit. I turned. Nothing. All seemed as it should. I did a quick 360 degrees turn, using my visual infrared feature of the helmet to scan for heat signatures. There, something giving off a very small heat signature  behind that outcropping.

Then it was gone. No heat signature reading. No movement. I looked away, for just a moment. When I looked back, they were gone. I wasted no time in getting up, keeping the pistol in my gloved hand and securing the exterior door after leaving the airlock.

Please leave a comment to let me know you were here and tell me how you feel about the unexplored frontier in space?

Thanks for dropping by and taking the time to read my post. Please remember to visit the others on the participation list found on Denise's blog. 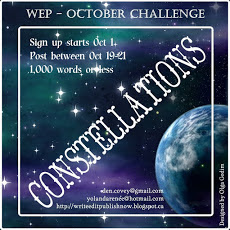 FLASH FICTION, POETRY, NON-FICTION, PLAYSCRIPTS, ARTWORK OR PHOTOGRAPHY.  It's your choice of medium, and genre, but the word count should be about 1000 maximum. Check out more details at the WEP site, and there you will find the entrants participating in this challenge!

Join us in these challenges, and practice your short fiction!WEP Hosts: Denise and Yolanda

CONSTELLATION DEFINED:
a group of stars forming a recognizable pattern that is traditionally named after its apparent form or identified with a mythological figure. Modern astronomers divide the sky into eighty-eight constellations with defined boundaries. OR a group or cluster of related things.

New! THE NOT-SO-INNOCENTS AT LARGE from R. Yeomans

“Paris was an old city, the very moonbeams seeming but ghosts of sad lovers wandering the night in search of their lost soulmate.”
Mark Twain

Welcome to my DON’T BUY MY BOOK! Blog Tour.  This stop graciously provided by the ever kind D.G. Hudson.

D.G. loves the Louvre … and since part of my Steampunk occurs in that fabled museum, I thought to speak of it.

But before approaching its awe-inspiring galleries, let me tell you why I named my tour: DON’T BUY MY BOOK!

Like life in Paris, the craft of writing is never simple, for it embraces not just the “How” but the “Why” and the “What” as well.

Most people have given up the hope of ever finding a book that so completely draws them in that they totally forget about their own lives and actually live the exploits of characters who have become more real than many of the people with whom they work.

Understand that there are no heroes … only ordinary folks who must step up to the challenges facing them and do more than what they feel they are capable of.

Tap into the primal fears we all have, the inner needs that comprise the human heart, and pull your reader into the turbulent lives of your characters by making him or her care if they win or lose.

How to do that?

When I wrote of visiting the Louvre, your mind filled with the magnificent items that the famous museum contains. I did that as a magician distracts the audience with a false flourish. You see, Paris of 1867 was an all too real city, filled with heartbreak and despair.  Those with seeing eyes found the rot beneath the gilded façade disturbing.

View the early morning streets of Paris through the eyes of Texican, Samuel McCord, and his Apache blood-brother, Elu:

Considering its many gardens, you might think Paris fragrant.  You would be right … and wrong.  Story of the human race I guess.  The streets of Paris reeked of decay both literally and figuratively.  Its idea of sanitation was to throw everything unwanted out into the street: dish water, feces … people.

The stench of Paris made me long for the clear, clean mountain air of home.  It wasn’t the soot that layered every building I passed, but the soot that stained this city’s soul.  Six thousand children a year were delivered like so much refuse to the orphanage run by the Catholic Sisters of Charity.

In various parts of the city, there were places with small boxes in which tiny babies could be “deposited” like unwanted clothes.  I sighed.  In winter one child in three of those children died of exposure.

Elu flicked hard eyes to me as we walked the awakening streets of Paris.  “Have I told you lately how much I hate the White Man’s cities?”

My steps picked up as I thought I spotted one of those accursed boxes.  Elu growled low under his breath and walked at my side like an angry panther.  I got to the damn box and bent down, dreading what I would find.

Still standing tall, Elu grunted, “What would you have done, Dyami, if you had found an infant there?”

I looked up at him puzzled, “Why take care of the child, of course.”

“Of course,” he laughed without a trace of humor.  “Dyami, even you cannot take care of the whole world.”

I nodded.  “Don’t mean to.  I just take care of those lost souls whose trails cross mine.”

Elu’s face became flint as he kneeled beside me, looking with disgust at the tiny box.  I had the terrible notion that his mystic nature was having him feel all the deaths that had happened to small crying babies who died of exposure or thirst in this wooden coffin.  He flicked harder eyes to me.

“Have I told you how much I hate the White Man’s cities?”

See how I put in juxtaposition your expectations of beauty with the confrontation of stark reality?  That is how you draw your reader in. Do not worry: a mysterious tour of the Louvre does take place at the end of my Steampunk novel …

Along with an aerial battle atop the Thunderbird against attacking dragons above the Eiffel Tower. And, there is much more:

The Sidhe kidnapping Princess Victoria; a deadly “Red Wedding” in the catacombs beneath the ancient Rouen Cathedral; the passengers of the first Air/Steamship, Xanadu, being attacked by the Fae Spell of St. Vitus Dance; Samuel McCord being cornered by the Rougarou, the werewolves of France.

What are you waiting for?

Disregard the title of my tour.  BUY MY BOOK! 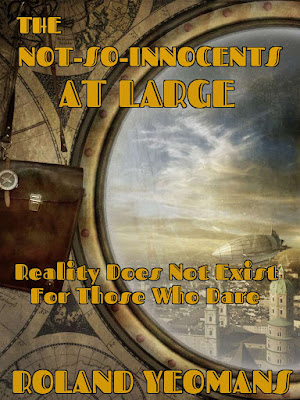 Any comments about the covers and images? Have you been to the Louvre Museum? If not, would you like to?

Please leave a comment to let me know you were here AND to welcome Roland to the Rainforest Writing Blog. Each comment will receive a reply. . .Thanks for dropping by! Please check out Roland's blog when you have time at Writing in the Crosshairs.