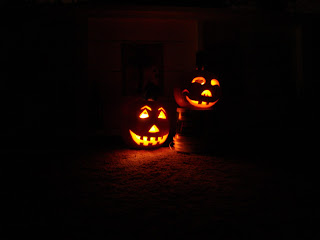 Starting Friday, and continuing over the Halloween weekend October 28-31, Jeremy Bates is hosting a Halloween Blog Hop. All the details are at his site (or you can use the Linky list at the bottom of this post):

Join in the fun and discover a few new blogs.  You've got four days to browse the list and see who's who. . . in between the fireworks and pumpkins and little ghosts and fairies.


Participants are requested to:

• Tell us your favorite monster movie or book

Have a look around at either of my blogs (they're on the list), and follow if it appeals to you.  Hope you have a great weekend!

BLOG HOP!   Blogfest day has ended, but you can still check out the links below if you haven't yet.   If you have time over the weekend, keep hopping about.  Who knows who you might discover? 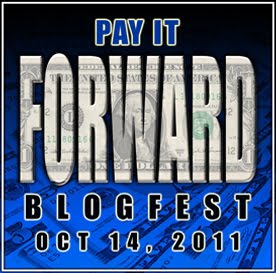 I'm participating in the Pay It Forward Blogfest hosted by:

The linky list is below, as well as on the host sites shown above.

"Here is how the blogfest will actually work: The idea is to introduce everyone to everyone else. We want this to be an easy post that allows you to meet and follow as many other bloggers as you can. In your post, we would like you to please list, describe, and link to three blogs that you enjoy reading, but that you suspect may fly under the radar of a lot of other bloggers. Or they can be famous blogs, as long as they're awesome.

But don't stop there! Certainly visit and follow all the blogs that are featured in people's posts the day of the blogfest, but those don't have to be the only blogs you visit. You can visit everyone who enters in on the fun, and signs up on the linky list. In the interest of time you don't even have to leave comment. You can just follow, and come back another time. After all, we all know we don't have time to visit every blog we enjoy every single day."

The Alchemy of Writing
http://alchemyofwriting.blogspot.com/  features short flash fiction one day of the week, has excellent custom cartoons and great photographs.  This is a great blog to visit often.  Owner: Bryan, aka INK likes to surprise.

Funds for Writers
http://hopeclark.blogspot.com/  offers something for everyone from the freelancer to the fiction writer with a dash of southern spirit thrown in. Info on grants, contests, and submissions in her newsletter.  Even more info resides on her website, Funds for Writers.  Owner: Hope Clark

Raising Dogs and Training Children http://raisingdogstrainingchildren.blogspot.com/  looks at the practical side of both.  A young writer mother explores what to do to keep a toddler learning and to give herself time to write.  Join her as she learns how to balance it all.  Owner: J. Burroughs

Thanks again to Matt and Alex!!

In October 2010, we were in Paris, France, trying to immerse ourselves in the City of Light as much as two Anglophiles can. I was also gathering material for a future novel based in Paris. This city surpassed my expectations. It draws you into its charms. One of those charms is the local food, the tiny bistros, the many choices of places to eat.

We walked, or used the Hop-On Hop-Off buses (Les Cars Rouge). Cost = about 24 Euros per person, and covers two days of use.  Here are some of the places we discovered.

What we had:  Andalusian sausage, Lamb rib chops, frozen nougat with raspberry coulis.  Great service, and the place was well-filled with locals (always a good sign).  We were never rushed and due to the rain outside, we sat warm and cozy under cover.  A very pleasant experience.


Bistrot Marguerite - on the Right Bank across from Hotel de Ville and next to the lovely Seine River.  A favorite.

What we had:  Baked cod dish - French style with onions and  potatoes, grilled salmon, steak and frites, French onion soup with cheesy toast salad.  The waiters were friendly and helpful.  We went back three times and were never disappointed. Average cost for two people with house white wine, entrees or plats and cafe lattes=48 Euros.

Update April 1, 2015:
The video of this bistro which previously was here was removed as it was no longer a valid link.

What we had:  German beer, Quiche and salad, and raisin pie (for those with a sweet tooth).   A real old world atmosphere.  Voltaire used to hang around here.  That's per the plaque on the building in the photo above.  No link for this one, but many reviews can be found.  We were there for lunch so meal cost about 50 Euros.  Use what French you know in this one for better service, it helps as they get lots of tourists in this area.  We had great food and enjoyed it.

A great people watching restaurant where we spent a very pleasant couple of hours.
What we had:  Fluffy omelettes, chantilly custard, macarons, coffee, and wine with water on the side.  We had a lunch break while walking in the Latin Quarter looking for 'Shakespeare and Co.', Les Deux Magots, and Cafe Flore.


Other Notable Eating Establishments: (mostly in the Marais and Latin quarters/arrondisements)

Important notes:
Prices can vary by high and low season.  We found eating out at the local restaurants gave us a chance to sample the fare that the Parisians were eating. This is easy to do in the Marais and on the Ile St. Louis, where many family owned restaurants prosper in the small side streets.

Reference:  Immerse Yourself in the Moment (A sensory tour of Paris)
http://dghudson-rainwriting.blogspot.com/2011/02/immerse-yourself-in-moment.html

***
Do you take notes when you travel?  Has any particular location or city found its way into your heart?