This author is a scholar who also writes historical mystery novels.


Umberto Eco, Order of Merit of the Italian Republic, (January 5, 1932 - February 19, 2016) was an Italian novelist, literary critic, philosopher and semiotician*. Eco, however is best known for his 1980 historical mystery novel, The Name of the Rose, an intellectual mystery combining semiotics in fiction, biblical analysis, medieval studies and literary theory.

Umberto Eco, one of Italy's leading public intellectuals, received numerous awards, and honorary degrees. He later wrote other novels including The Prague Cemetery, (Il cimitero di Praga) released in 2010, which was a best-seller.

Eco died at his Milanese home on February 19, 2016, of pancreatic cancer. He had suffered for two years. He was 84 years old, and was a professor emeritus at the University of Bologna, a position he held since 2008.

Eco's fiction has enjoyed a wide audience around the world, with many translations. His novels are full of subtle, often multilingual, references to literature and history. Eco's work illustrates the concept of intertextuality, or the inter-connectedness of all literary works. Eco cited James Joyce and Jorge Luis Borges as the two modern authors who have influenced his work the most. 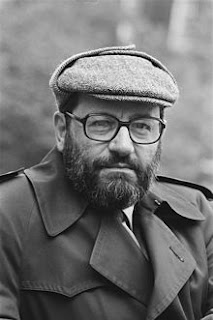 Eco employed his education as a medievalist in his first novel, The Name of the Rose (1980), a historical mystery set in 14th century in a monastery.  Franciscan friar William of Baskerville, aided by his assistant, Adso, a Benedictine novice, investigates a series of murders at a monastery that is to host an important religious debate.

The Name of the Rose was later made into a movie starring Sean Connery, Christian Slater and others. The script employs the plot but not the philosophical and historical themes from the novel.

This is an excellent film, a bit dark in tone, and full of sinister hidden meanings.Sean Connery of course is perfect as William of Baskerville.

*semiotics
The study of meaning-making, the study of sign processes and meaningful communication. Semiotics is seen as having important anthropological dimensions; for example, the late Italian semiotician and novelist Umbert Eco proposed that every cultural phenomenon may be studied as communication.

Image of Umberto Eco in flat cap and glasses, May 1884
This image from the Nationaal Archief, the Dutch National Archives, and Spaarnestad Photo, donated n the context of a partnership program.