Imagine a Ringworld**, where gravity and perspective vary from the more common sphere shaped planet. Larry Niven is the creator of such a world.

Many of Niven's stories comprise the Tales of Known Space - and take place in his Known Space universe, where humanity shares the several habitable star systems with over a dozen alien species. Ringworld is part of the Known Space series.

Then, there's Niven's Law:There is no cause so right that one cannot find a fool following it. Niven has added to the first law a list of Niven's Laws, which he says describes 'how the Universe works' as far as he can tell.

What is a Ringworld? "A band of material, roughly a million miles wide and of the same diameter as Earth's orbit, rotating around a star." Niven was trying to envision a more efficient version of a Dyson Sphere. His most famous contribution to the SF genre comes from his novel Ringworld. It's an interesting concept. . .a dizzying one. 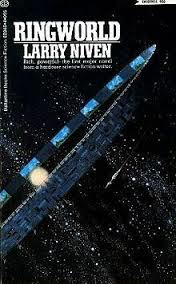 Please leave a comment to let me know you were here and I'll respond.  Thanks for dropping by!


Image of Larry Niven  (top of post)
Permission is granted to copy, distribute and/or modify this document under the terms of the GNU Free Documentation License, Version 1.2 or any later version published by the Free Software Foundation; with no Invariant Sections, no Front-Cover Texts, and no Back-Cover Texts. A copy of the license is included in the section entitled GNU Free Documentation License.