This man has been known to be Uplifting. . . 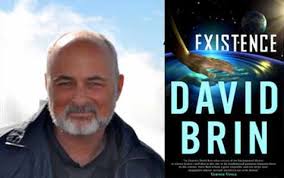 Authors AtoZ will present a mixture of genres and authors,and will include literary authors, lost generation writers, a Beat writer, journalists turned authors, and a few surprises.


Glen David Brin, born October 6, 1950 is an American scientist and award winning science fiction author. He's received the Hugo, Locus, Campbell and Nebula Awards. One of his novels, The Postman was adapted to film, starring Kevin Costner in 1997. In nonfiction, Brin's The Transparent Society won the Freedom of Speech Award of the American Library Association and the McGannon Communication Award.

Brin helped establish the Arthur C. Clarke 'Center for Human Imagination' and serves on the advisory board of NASA's 'Innovative and Advanced Concepts' group. He has been a guest on certain tv shows such as The Universe and Alien Encounters and serves on the advisory board for the Museum of Science Fiction. Brin writes hard science fiction and uses plausible scientific or technological change as part of his plot driven stories.

Following are some of his works: The Uplift Novels (involving uplifting creature species to a sentient state)-Sundiver, Startide Rising and The Uplift War; The Uplift Trilogy (aka Uplift Storm trilogy)-Brightness Reef, Infinity's Shore, and Heaven's Reach. All these books were written between 1980 - 1998. I have read all of these novels.

Brin has written many stand-alone novels, but the ones I've read are:  The Postman (1985), Heart of the Comet (1986), Glory Season (1993), and Kiln People (2002). The Postman was converted to film by Kevin Costner-who also played the main character.  In addition, Brin authored graphic novels, short fiction and one of the three books in the Asimov's Foundation Universe - Foundation's Triumph (1999). Which leads to the Killer B's.

David Brin, Greg Bear and Gregory Benford - the Killer B's of SciFi. Approved by the the family of Asimov, these three writers created the Second Foundation Trilogy, in an attempt to wrap up loose ends and explain gaps in the timelines. I'd recommend these three later novels to the fans of Asimov or the Foundation series.

***
Have you heard of or read David Brin novels?  What do you think about dolphins piloting spaceships?

Please leave a comment to let me know you were here and I'll respond. Thanks for dropping by! Hope to see you around the A to Z list.

A to Z Blog Listhttp://www.a-to-zchallenge.com/p/a-z-challenge-sign-up-list-2016.html

Interesting news related to this post re Foundation series. http://davidbrin.blogspot.ca/2014/12/ascension-and-interstellar-is-boldness.html