Ernest Hemingway - For Whom the Bell Tolls, A Review 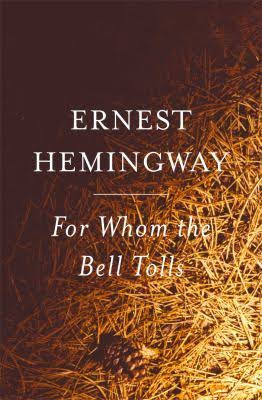 Waiting is the hardest part of any venture, especially during war time, and this story shows the mental stress and psychological strain that results. For Whom the Bell Tolls starts out slow and builds towards the bridge and its demolition, which is the goal of the main character.  He's a hired explosive expert working in a country that isn't his own. Attached to the bridge project in various ways are the people who live and fight in the mountains, the enigmatic girl saved from the train, the foreign sentries guarding the bridge, and the enemy troops coming closer every day.

The characters: Roberto (Robert Jordan), explosions expert; Maria, the female interest; Anselmo, the old guide; Pilar, the matriarch who controls much of the actions of the local group; and Pablo, the tired old leader who stirs the trouble pot to see what Roberto will do. Each has his own doubts, his wants, his fears and his past. Into this maelstrom of testosterone comes a love story, a relationship which might not have happened in any other time. Two people who have no personal connections to hold onto are thrown together in wartime, when no one knows what the future will bring. Roberto's cold heart and Maria's painful past find solace in the other's company.

Hemingway's male perspective on the intimacy between Roberto and Maria is somewhat subtle considering today's standards, but anything more would intrude. Duty, honour, and dedication to one's cause is the thread that runs through the story. The setting is the Spanish Civil War, the story is about trying to protect one's home from outside forces and the resulting cost in human terms. One particular scene details how Pablo deals with the Fascists and anyone he deems to be sympathizers.

This is also a story about how war affects those who must fight and those who must watch. It's a clear look at the good (comradeship, duty, honorable acts), the bad (excessive killing and torture) and the ugly (destruction of bridges, homes, etc) aspects of any war. I like Hemingway's style of writing and although it's not my favourite Hemingway novel, it is an important one, for which he was awarded the Nobel Prize for Literature in 1954. I recommend this book if you want to understand more about the Spanish Civil War and the painting that Picasso painted in 1937, Guernica, after the bombing of the town of the same name.


***
Are you a Hemingway fan? Have you read this novel? In general, do you read to learn more about a certain point in history, or do you prefer only to be entertained?

Please leave a comment to let me know you were here and I'll respond.  Thanks for stopping by! More reviews are on the horizon. . .

Hemingway posing for a dust jacket photo by Lloyd Arnold for the first edition of "For Whom the Bell Tolls", at the Sun Valley Lodge, Idaho, late 1939.

This image was only used on the 1940 edition. It was common (and allowed by the copyright office) to change things such as the preface, foreword, and dust jacket when renewing a book. If the old book cover was not renewed along with the book, it fell into the public domain. This work is in the public domain because it was published in the United States between 1923 and 1963 and although there may or may not have been a copyright notice, the copyright was not renewed. This also applies to Canada.
***
Posted by D.G. Hudson at 7:00 PM