The sailing ship, Lucky Lady, bobbed in the waters of Schooner Cove in old Key West. I sat in the bar nearby sipping a Mojito. Tonight, I would be on that tall-masted beauty.

"Leave the city behind," my friends said, "go somewhere new. You need a change."

It wasn't romance I was running from; nothing so simple as that. I had told my dark secret to no one, and without clues, the police had no reason to question me. A new identity, a new face, and no one will ever know what happened to me, that woman who fell overboard during the midnight astronomy cruise.

I waited until all was quiet, the guests were in their bunks, and the captain was in his quarters. Slipping over the side of the sailing ship, I dropped silently into the warm water. The black wetsuit made me nearly invisible in the darkness. I glided toward the meeting spot where a fishing boat signalled with a small light. I paid well, so no questions were asked.

The old fisherman in the boat had tackle for mullet fishing, in case we were stopped by the Coast Guard. I changed in his cabin packing the wetsuit in a bag to discard as soon as I could. I was brought to shore at a location a few miles from the airport and caught a cab nearby. I had a one-way ticket to London on British Airways. I would decide my final destination from there.

In London, I searched the news and found the article I was looking for:Woman Lost at Sea on Cruise in Key West. All the pieces were falling into place. The local police in Key West, Florida would be sending divers down to locate the body. It was possible, according to 'the experts', that no body would be found. There had been an increase in the local sharks known to occupy the Florida waters.

Being considered dead could benefit me in several ways. It's easier to be 'born again' with surgery, than to find a safe hiding place.

Here I sit now in my Paris apartment, wondering what my next move will be. I'm in too deep to change my mind. Freedom is a hell of a lot better than spending time in prison. I will be forever haunted by what I call an honourable act, some call revenge, and the law calls murder. I knew it came with a price.

I  closed my eyes, but I felt the memory coming back, and then I was there, back in that dimly lit hallway of an old apartment building. . .

. . .I'm walking down the corridor. . .I hear small noises like talking, I'm almost there, get ready, release the safety, secure grip, push door, throw in a smoke device. It lands between the man and his woman on the bed. This man killed my sister. They turn as one, I aim and fire, intent only on accuracy. Snick! Smoke is filling the room. No witnesses. Aim. Snick! Keep moving fast. . .  Focus. Remove silencer, empty chambers, get out of the building. Into the car and on the road.


****
I pulled myself out of the memory of that vivid moment that kept fermenting and washing over my thoughts without warning. It was a trigger for anxiety and paranoia. I took some pills to suppress the memory of my crime, before it drove me mad. This was the price I paid for the satisfaction of seeing my sister's murderer dead.

I sipped the wine in front of me and felt the coolness slip down my throat. Life on the run was the path before me. I would have to forget old friends, old lovers, and never go home again. I have to become someone totally different. I have to believe the lie myself.

The deed is done. Do I regret it?

No. It was necessary.

******
What would you do if someone you loved was murdered and you knew who did it? Would you exact revenge? Do you think you could handle changing identities and your face?

Please leave a comment to let me know you stopped by, and I'll respond. Thanks for visiting! 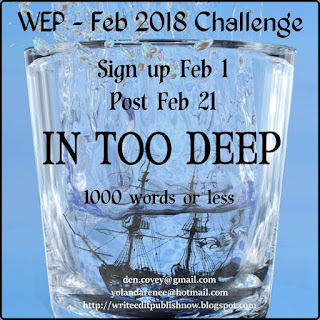 It's time for another year of WEP challenges - with the support team of Nilanjana Bose and Olga Godim adding their imaginings and creativity. Thanks to Denise and Yolanda for being the hosts!


The challenge:
Create an artistic entry using the given prompt: a poem, a flash fiction piece of 1000 words or less, a non-fiction piece detailing your personal experience or someone else's experience, write a script, draw your dreams, or post a photograph or a photo essay. The genre and the artistic choice are yours!

Be sure to check all the other entrants on the WEP participation list!

***
Note: this story is a compilation of bits and pieces re-purposed to create a new story. You may remember the gun scene from WEP - Changing Faces - What Now?