A Serial Interview with Roland Yeomans

A knock came at the front door as the last golden rays of day turned into night.

I wasn't expecting anyone. I kept quiet and didn't move. Maybe, whoever was out there would go away. Within a minute, I heard a knock at the back door, at the unlocked back door. An increasing sense of urgency zipped up my spine, yet I felt immobile. . . I stood. The knock came again. . . I couldn't lift my feet.

The book, The Boston Strangler, lay on the desk beside me. Did a strangler knock on doors to find his victims? This one did.

In the spirit of the Hallowed Season, I booked an interview with the creator of Dark New Orleans stories, Roland Yeomans. Some of his novels are set in Meilori's, a late-night jazz club, populated by the undead but open to the living if they dare. Lucifer's Orphan, one of Roland's latest and part of a series, takes the reader on a different journey. It's about a young boy about to be adopted, but it turns into something else once that young boy arrives at his destination. 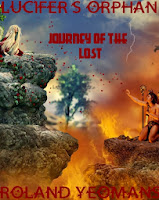 
I was back at Meilori’s. Everything I wore was black: from the wide-brimmed hat to my stylish Niki running shoes.  (Running shoes were wise to wear as was black.)  As Roland told me: “It is best to wrap the shadows of Meilori’s around you.  A hard-to-see target is hard to hit.”


I was at Roland’s table.  He was giving the squirrel on his shoulder sugar cubes to chew.  Apparently, Ratatoskr, the Asgardian squirrel, was here to visit Roland again too.


I drew in a breath.  The ghost of F. Scott Fitzgerald sat down beside me.  He took my hand and kissed it lightly. His gossamer lips tingled on my skin.


“Ah, I just had to see the woman who has written so highly of my works on her electronic newspaper.”


He frowned, “I refuse to say that word.”


Fitzgerald looked witheringly at Ratatoskr.  “Roland, must we have rodents at the table?”


Roland spoke softly but firmly.  “All my friends are welcome at my table.”


Fitzgerald sighed, “In that case …”


He held up a hand and snapped his fingers.  “Waiter!  Champagne.”


He took another look at Ratatoskr.  “Two bottles!  I refuse to see a squirrel at my table when I am sober.”


I turned to Roland, fighting a smile.  “Some of your stories, remind me of the noir genre in film. Do you have any primary film influence which generated this interest in the dark shadowy world of the undead?”


Roland nodded.  “Noir indeed inspired me.  THE BIG SLEEP.  THE MALTESE FALCON.  THE BLUE DAHLIA.  The FU MANCHU series read to me and my other friends in the LEAGUE OF FIVE influenced me as well.  As did the HAMMER DRACULA films.”


Roland looked out into the shadows.  “I longed to merge Noir into the world of the supernatural which to me only seemed …”


Fitzgerald murmured, “That is part of the beauty of all literature. You discover that your longings are universal longings, that you're not lonely and isolated from anyone. You belong.”


I asked, “Why are there so many cold-hearted females in your stories, Roland?”


Roland smiled sadly.  “The personal reasons will have to stay personal.  But it is the Noir influence, yet it really goes back further.  The femme fatale flourished in the Romantic period in the works of John Keats, notably ‘La Belle Dame sans Merci’ and ‘Lamia’.


Along with them, there rose the gothic novel, The Monk featuring Matilda, a very powerful femme fatale. This led to her appearing in the work of Edgar Allan Poe, and as the vampire, notably in Carmilla and Brides of Dracula.”


Ratatoskr, ever ready for gossip, listened intently as Roland went on, “During the film-noir era of the 1940s and 1950s, the femme fatale flourished in American cinema. Examples include Brigid O'Shaughnessy, portrayed by Mary Astor, who murders Sam Spade's partner in The Maltese Falcon (1941).”


Roland said, “It goes all the way up to the present with Xena and all the way back to Eve – Samuel Clemens and I believe Adam bit into the apple, knowing it would exile him from the Garden but allow him to stay with the woman he loved.”


Fitzgerald looking longingly at the ghost of his wife, Zelda, dancing with Marlene Dietrich and whispered,


“I fell in love with her courage, her sincerity, and her flaming self respect. And it's these things I'd believe in, even if the whole world indulges in wild suspicions that she wasn't all she should be. I love her, and it is the beginning of everything.”


Roland said, “I am drawn to strong women who are their own person driven by their own minds and dreams – and that holds the very real threat that ultimately I will be hurt.  I write strong heroes who have the same make-up.”


Fitzgerald nodded, “We are all flawed creatures with sharp edges.  The price of drawing close is to bleed.”


“No bleeding, please,” I said. “Roland, the setting of HER BONES ARE IN THE BADLANDS is the silent film era and the birth of radio – a time when people listened.  The setting of LUCIFER’S ORPHAN is today when everyone talks but no one listens.  Were you trying to tell your readers something by the difference?”


“Just that very dichotomy.  In this time of Twitter and Facebook, everyone seems to be screaming, “ME, ME, ME!”  And no one is listening.  In the time of the silent film, people listened but their very isolation kept them from hearing at all.  Both times were lonely and starved emotionally … but for different reasons.”


Roland continued with a sad smile, “I was trying to convey that in the press conference in LUCIFER’S ORPHAN.  Nearly everyone was wearing a mask.  But the irony was that only when the masks were taken off did anyone feel heard.”


Fitzgerald said to me, “I like Roland’s smile.  It is one of those rare smiles with a quality of eternal reassurance in it that you may come across four or five times in life. It seems to face the whole eternal world for an instant, and then concentrates on you with an irresistible prejudice in your favor. It understands you just as far as you want to be understood, believes in you as you would like to believe in yourself, and assures you that he has precisely the impression of you that, at your best, you hope to convey.”


Ratatoskr snickered, “How much champagne have you had?”


That was my cue to exit. I pulled down the brim of the hat, waved at Fitzgerald and with Roland’s help, found the side door and the waiting taxi. Meilori’s neon sign seemed to hang in the mist when I looked back.

Two orphans are set against each other by an unsettling adoptive father. The young boy, Blake, sees under the 'glamor' but has no choice except to bide his time. Fallen, his competition and a shapeshifter, changes her assessment of the boy once she sees his abilities.  Read about their story in Lucifer's Orphan. (I'll be reviewing this soon.) 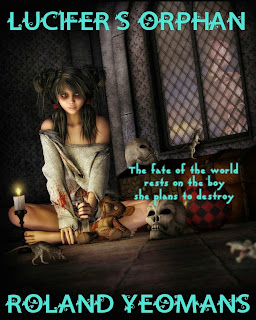 The First SERIAL chapter, Lucifer's Orphan is out NOW! Next up is Her Bones are in the Badlands, shown below. It's on my TBR list.

Check Roland's blog for details on the serial and the Halloween Blogfest. If you'd like to join in the naming of creepy books that might have marred us as adults, visit Roland's blog, Writing in the Crosshairs. This fest runs October 1-31 until the witching hour. 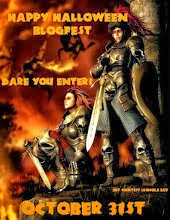 What book scared you the most OR made you change your habits? (i.e., no arms or legs hanging off the bed, no answering doors after dark, closet doors shut)

Please share in the comments and thanks for stopping by!