Norse Mythology and 'Secrets of the Ash Tree'


Boon companion of Odin, she had other talents, as well. . .


Sága was a patron of Seers and Writers.

Scrolls and mead was sacred to Sága. She is called an obscure goddess, yet she is linked to poetry and the poetic arts (writing and history). She inspires with prophecies. Her name is associated with the Norse meaning 'to see', this may imply that Saga was a seeress, as was Frigg.

The overlapping of the two names and their meanings has led to various theories on the connection of Sága to Frigg. Sága is said to be the handmaiden of Frigg and the daughter of Odin, or an incarnation of Frigg. An elusive goddess may be that way for a reason.

Reclining against the branches of the overturned tree, knocked down by her father Odin, Sága set her hammered gold chalice on the branch hook and looked at him.

"But I'm your father, I have a reputation to protect."

"I'll write a poem about this, you know."

"Be sure you describe me as handsome."


For those who like Mythology. . .
A gift of prose to the Norse Gods, will be celebrated with a blogfest on Oct 9, 2013.


‘Secrets of the Ash Tree’
by Siv Maria Ottem 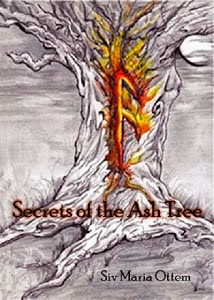 Siv celebrates her new book, ‘Secrets of the Ash Tree’, with Captain Ninja- Alex Cavanaugh and the Norse Gods at the well of Urd. A Norse Gods blogfest party is being held on Siv's birthday, October 9th! There will be presents for certain lucky participants. Siv's blog tour for the release of ‘Secrets of the Ash Tree’ will be from October 7th-14th.

Tell us something about Norse Mythology and learn about a new book, one which might make you want to think about your own secrets. Details are available at Been There Done That:or at Alex's blogsite.


Do you follow Siv's blog, Been there, Done that? Do you like Mythology? Did you know of Sága, the elusive Goddess?
Please share in the comments, I'm listening. Thanks for stopping by!
***

An illustration from Fredrik Sander's 1893 Swedish edition of the Poetic Edda. Reprinted with Erik Brate's 1913 translation which in turn is published by Project Runeberg at http://runeberg.org/eddan/ from where the image is taken. Published before 1909 and thus in the public domain in the United States.