Death in the House of Life - Roland Yeomans


I stared at the photograph of her taken in the museum in Paris. Did that statue move? I had been reading Death in the House of Life, a story set in 1880s Egypt. What spirits would this tale of Roland’s awaken?

I put the photo on the table, face down. I remembered the first time I saw her statue. It was a day that seemed strange from the time that morning when I sketched the lioness profile across the street, until I saw Sekhmet in the Louvre Museum, with the same leonine profile.

She, carved of cool dark porphyry, stared ahead, forever gazing in the distance. I’m sure I saw her move. . .I had no idea who ‘She’ was, but her profile looked neither threatening nor compassionate, simply regal. No other visitors or museum employees were nearby. I wondered how long She had rested beneath the sand before being brought to light again . . .

Death in the House of Life


D.G. Hudson pried open her heavy lids. What? She was in a hospital room.

The ghost of Mark Twain took her hand gently with chill fingers. “My dear, I am so sorry about what happened.”

Sadly, in true Twain tradition, he only managed to knock poor D.G. from her seat. She gasped at the pain of a wrenched back.
“Oscar,” murmured the steel velvet voice. “Please take Ms. Hudson back to her time … and a hospital. I will visit her later.”
Mark squawked as the sound of his body being lifted came to D.G. and Meilori said low, “Sammy, we are going to have a talk.”
Oscar whispered in DG's ear: “I wish her luck. Talking to Clemens is like talking to a brick wall, But I, myself, like talking to a brick wall— it is the only thing in the world that never contradicts me!”
“But Mark meant well.”
“Posh, my dear, so do those horrid terrorists in your time. But never mind what I say. I am always saying what I shouldn’t say. In fact, I usually say what I really think. A great mistake nowadays. It makes one so liable to be misunderstood.”
And with that memory, D.G. was back in the present, awaiting Meilori’s visit. But that is a tale for another time.
*** 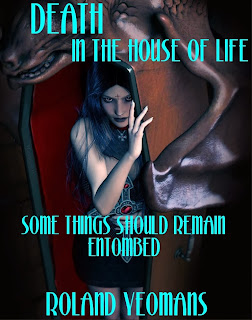 Samuel McCord is a man cursed with death in his veins, with an outdated code of honor, and with a mysterious wife who is older than the Sphinx. In fact the Sphinx was modeled after her.

Follow Samuel McCord to the living nightmare world of a 12 year old Sammy Clemens in Missouri, to a nocturnal campfire visit from Pele beside a 31 year old Mark Twain in the Sandwich Islands, and to a cursed archaeological dig in 1895 Egypt with Mark Twain, Oscar Wilde, Nikola Tesla, and his alien wife, Empress Meilori Shinseen.

Ancient Egypt murmurs mystery. And well it should. Excavating ruins tempts so many. So many die from venturing where mystery kills.

Samuel McCord has seen untold horrors. The worst is yet to be unveiled: the monster within the woman he loves with all his heart.

The End is coming. The portents murmur in the stars. Death is on the breeze, and madness dances in the darkness. Awakened Evil slithers from its opened crypt.

Can one cursed Texas Ranger manage to save the world AND his marriage?

The answers are in the next SAMUEL McCORD adventure:
DEATH IN THE HOUSE OF LIFE

***
Do you have an interest in Egyptian artifacts, or statues? Have you read any of Roland's novels? Ever heard of Sekhmet, the Egyptian Goddess?

Please let me know in the comments that you were here. Thanks for stopping by!

If you like Egyptian intrigue with a literary flavor (Wilde-Twain) be sure to get your copy. Check at Roland's blog
Or Amazon: http://www.amazon.com/dp/B00HIU5O38