A glimpse of the ART world, in the manner of an alphabetical mini-art tour. ART focuses on artists and art movements. This painting style goes back to the 15th century.

Characteristic features of Yamato-e include many small figures and details of buildings and other objects, with the artist selecting a few of the elements in a scene to be fully depicted. The viewpoint is often aerial, with cutaway rooftops in some illustrations. Landscapes are very stylized.

Yamato-e style painting is often used for a narrative story, with or without text. These paintings can deal with the beauty of nature, the four seasons or famous places. The work is often on scrolls for the wall, or handscrolls that read from right to left, a folding screen or a panel. There was a Yamato period in Japanese history, but no Yamato-e paintings survived.
This style is not restricted to a particular period.


The Tale of Genji*, a classic work of Japanese literature written by the noblewoman and lady in waiting Murasaki Shikigu in the early years of the 11th century.


ART TRIVIA  - Claude Monet, French artist was a collector of Japanese art and displayed part of his collection on the walls of his Garden house in Giverny, France. No photos allowed inside, however, for the protection of the art.

Did you know about Yamato-e style painting? Do you like the aerial viewpoint and lush colors?

Brought to you by the A to Z Blog Challenge 2014 Team and the originator: Lee of Tossing it Out. Click the A to Z list of participants and read on. 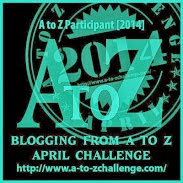 http://en.wikipedia.org/wiki/The_Tale_of_Genji The Tale of Genji

Illustration of the The Tale of Genji, Wakamurasaki, credited to Tosa Mitsuoki (1617–1691) late 17th century

This work is in the public domain in the United States, and those countries with a copyright term of life of the author plus 100 years or less. This file has been identified as being free of known restrictions under copyright law, including all related and neighboring rights